Improved storm water quality in an industrial area in Helsinki

As part of the project “Kaupunkivesistöt kuntoon”, financed by the Ministry of Environment of Finland, City of Helsinki built a biochar filtration pilot next to a small-industry area.

In the past, strom water from the area ran directly into a ditch discharging into the Haaga brook running into the Baltic Sea. In recent years, lots of effort have been put to restore the population of sea trout living in Haaga brook. In order to protect the sea trout population there was a need to improve the quality of storm water reaching the Haaga brook. Due to industrial activity in the area, the quality of the storm water flowing in the ditch towards Haaga brook has been deteriorating and the brook has been exposed to leakages of oil and harmful substances.  With the biochar filtration solution, it was possible to reduce the amount of oil, nutrients, heavy metals, solid matter entering the Haaga brook and at the same time slow down the water flow. Another aim of the pilot was also to test the functioning of biochar filtration in a densely built city area.

The site where the pilot was built was challenging due to the limitation of space. The catchment area is about 20 hectares and the space available for constructing the pilot was only 1500 m3 which is about 0,75 % of the size of the catchment area. In addition to this, there was hardly any altitude differences in the ground level and hydrostatic head towards the storm water sewer located above could not be increased.

The structure of the filtration system is a shallow sedimentation basin, taking up to 200 m3 of water, which corresponds to the rainfall of 3 mm in this densely built and mainly impermeable catchment area. To optimize the efficiency of filtration capacity and permeability, the filtration layer on the bottom is a mixture of biochar and crushed aggregate. On top of the sedimentation basin there is a dense willow thicket which evaporates the water and absorbs nutrients and contaminants.

This storm water filtration structure is still new and not many monitoring samples are available to evaluate the effectivity of the structure in cleaning storm water. However, based on preliminary samples, biochar filtration effectively removed phosphorus from storm water. Concentrations of dissolved phosphorus were under the detection limit after the filtration. A very effective phosphorus removal was obtained even without any boosting chemicals (e.g. ferro oxide).  Nitrogen removal was not as efficient. Nitrogen compounds mainly passed unaffected through the structure. Only ammonium concentrations decreased by filtration, in average 15% of incoming ammonium was retained by the structure.

Concentrations of many metals typical in urban storm waters, like cadmium, cobalt, chromium, nickel and copper were decreased in filtration through biochar. The decrease was in average 25 %, but varied markedly between metals and sampling occasions. However, the concentrations of strontium and uranium remained unchanged in filtration.

Polyaromatic hydrocarbons (PAH) were detectable only in few samplings mainly remaining under the detection limit. However, in few sampling occasions a significant reduce was observed after the filtration.

The structure was implemented in a project called “Kaupunkivesistöt kuntoon”. It was co-funded by the Ministry of Environment of Finland. 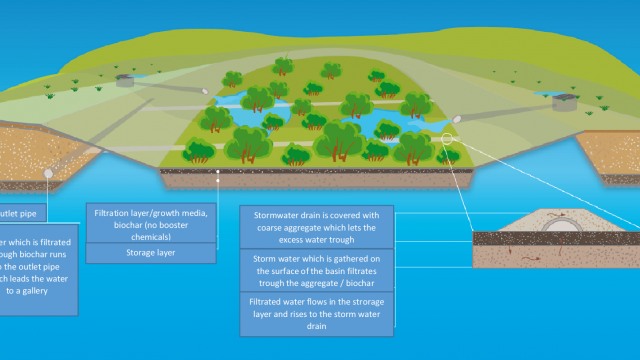 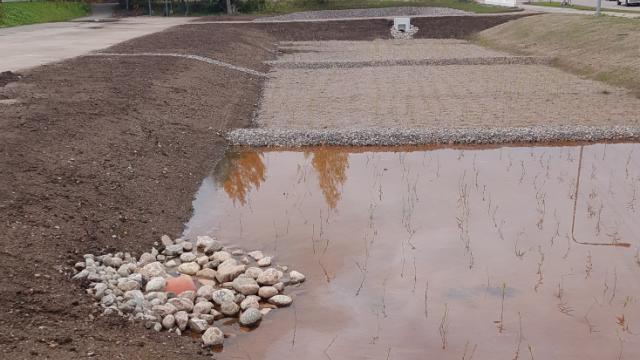 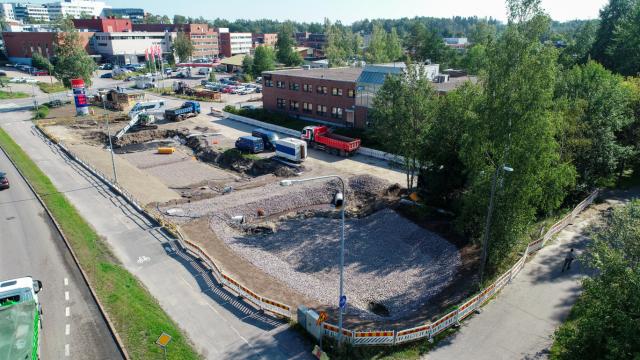 Happy news for the urban sea trouts in Helsinki