Biochar based filtration structure in Otsolahti

Otsolahti is located in Tapiola, Espoo. It is a shallow, almost closed sea bay, which has become shallower and increasingly eutrophicated over the years. In the past, storm water run directly through the storm drain into Otsolahti. As part of the project “Kaupunkivesistöt kuntoon” (2017-2019), financed by the Ministry of Environment of Finland, a biochar filtration structure was built in Otsolahti park, next to the bay in order to protect the bay from eutrophication.

The storm water drain network collects stormwater from a large area in Tapiola and the busy main highway arteries run through the area. The filtration structure gathers storm water from an area of 16 ha. In the filtration structure, stormwater runs from a large storm drain embedded under the park into an underground structure which infiltrates solid matter, nutrients, heavy metals and oil from the water before the water runs into the bay. Besides environmental protection, another aim of the solution was to verify and gather experience of usage of biochar based storm water filter structure in a city, such as investment and usage costs, environmental effects, e.g. nutrient recycling, operating life, a need for maintenance and possibilities for reusage of biochar.

The storm water filtration system in Otsolahti of Tapiola is based on the ability of biochar to retain water, nutrients and contaminants. Due to its porosity, durability and its large specific surface area, biochar is well suited for treating storm water. Biochar is produced by burning biomass, usually wood, at a very high temperature without oxygen. In this form, coal is very persistent and long-lasting, so the use of biochar in various structures also helps to curb climate change.

Before the installation of the filtration structure, storm water flow in the stromwater drain was measured in order to find out the volumes and intervals of the incoming water. According to the results the flow 29 November 2017-3 January 2018 was at highest 270 l/s and on average 26.5 l/s. Rainfall within the same period was  137.6 mm. In the spring time 3 April - 3 May 2018 the flow was max 88.5 l/s and on average 2.3 l/s. Rainfall was 27 mm.

TOC and DOC were not affected by the filtration.

Phosphorus was effectively removed from storm water. Average reduction of total phosphorus in the discrete samples was 70 % and for dissolved phosphate phosphorus 68 %. Based on the results phosphorus was removed especially in the biochar filtration and not so much in the sand trap.

Majority of polyaromatic hydrocarbons (PAH) and oil hydrocarbons were retained already in the sand trap, 63-83 %. In total 74-88 % was retained by the filtration structure.

In order to avoid clogging it is important to select the materials in the filtration structure carefully. For example quality of the water and coarseness of the filter cloth have an impact on how easy the structure clogs. It is better to choose coarse filtration material even on the expense of retention time. Cost effectiveness is reached through long maintenance intervals even tough filtration results weakens due to short retention. Constant flow of water decreases the risk of clogging.

The structure was implemented in a project called “Kaupunkivesistöt kuntoon”. It was co-funded by the Ministry of Environment of Finland. 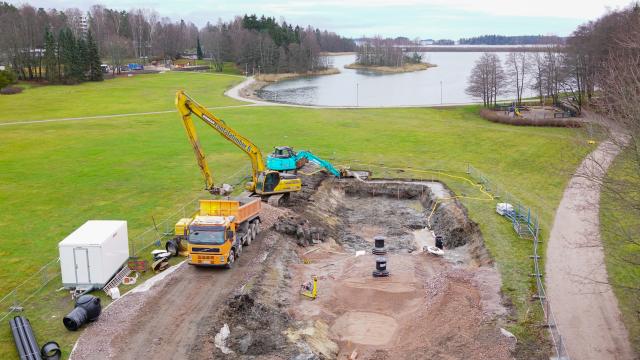