The Ferrybox is a system of integrated hydrological and biogeochemical sensors installed on ships of opportunity (like ferries on fixed routes between Piraeus - Heraklion, Tunis-Marseilles, Tunis-Genoa and Tallinn – Helsinki) that measures physicochemical and environmental parameters while the boat is underway. In these existing Ferrybox facilities, the H2020 project CLAIM’s goal is to add an automated seawater sampling device and passive flow-through filtering system to assist the collection of data on the distribution of microplastics and understand their distribution and impact on marine ecosystems.

The system has been designed and manufactured by HCMR in Greece, initially as a prototype filtering system for configuration of several diameters of filtering components and automated flow rate controllers. It has been further tested in a coastal sampling station and on board of an R/V vessel. In more detail, following the first testings that took place in the Sea Water Sensing Laboratory @MIO Marseille (SSL @MM, MIO, Marseille) between 2 and 6 May 2019, aiming to simulate the use of the first prototype under controlled conditions and the retrieval of the stainless steel filters and collected material. The flow rate, pressure control, over pressure conditions, and sampling collections were tested extensively, while using different configurations before installing the system in the Estonian R/V SALM (TTU, Tallinn). The second testing experiment took place on the board of R/V SALME on the 21st of May 2019 during a scientific cruise in the Baltic Sea with the purpose of evaluating the operational performance of the prototype system in realistic sampling conditions. The first prototype was then optimised into a second prototype, based on the first operational results. The latter prototype was validated by a final test conducted in the Poseidon Calibration Lab (PCL, HCMR Crete) between 18 and 20 February 2020. The testings were focused on the performance of this final prototype by using calibrated plastic particles of different dimensions and shapes diluted in a 1000 L calibration tank. The results of the experimental procedures assess the efficiency of the second prototype and suggest that it is ready to be installed onboard  the CLAIM Ferrybox (FB) systems to generate observations.

The inferior generation prototypes have been sent to Tunisia and Estonia. The former one remained in Greece and has been installed in R/V AIGAION of HCMR. In Tunisia it is now built in on board of the Tunisian Ferry C/F Carthage of the Tunisian Navigation Company CTN (Compagnie Tunisienne de Navigation). The prototypes are already successfully collecting samples.

The collected samples will be sent to CNR Italy and DTU-Aqua for performing the measurements of the microplastics.

The filter system is composed by 4 special designed holders, able to host inox mesh filters of different dimensions. The system can operate with internal pressure of more than 10 bars, in order to avoid any danger from a severe leakage or failure in the case of a blocked water flow by a large particle (e.g. piece of plastic bag) during its operation on board.

Calibration using known microplastic amounts revealed powerful operational potential of the device. Future tests in field conditions and sample analyses will contribute to the improvement of the seawater sampling device and passive flow-through filtering system during the operation in the CLAIM FB observatories.

The research vessel tests conducted in the Baltic Sea favoured an objective that consisted of sampling for a long period in order to check for any clogging, specifically possible in the turbid waters of the Baltic Sea. The filtering device and the control board were installed on the 21 of May 2019 in the wet laboratory of the R/V SALME Seawater from the Bluebox Ferrybox system flows through at a flow rate of 10-13 L/min and a maximum pressure of 1 bar. The seawater flow started at 9h30 LT (UTC+3) after checking the overpressure valve operational readiness. The flow rate was adjusted at ~11.5 L/min and decreased slowly with time The experiment ended up at 19h11 LT and flow rate was of ~10.5 L/min. A total of 6393.3 L was sampled through the device.

No clogging effect the device performance was inside the acceptable limits (Graph presented in the gallery).

(VAT is not included) 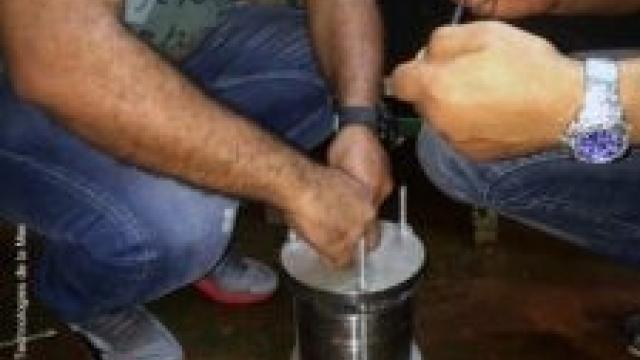 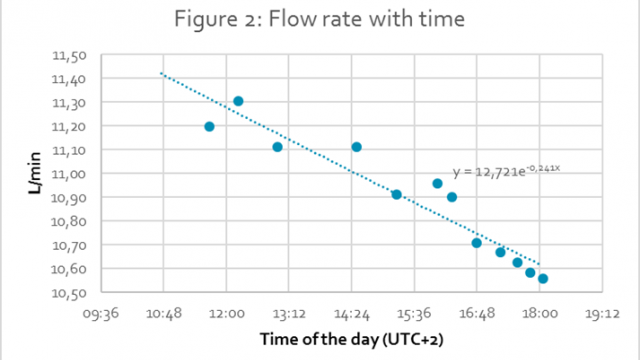