Inexpensive and reliable solution for the reconstruction of existing standard stormwater treatment plants using biological treatment with a fibrous carrier and selected immobilized microflora, as well as applying cleaning devices that are floating on the surface with hydrobionts and attached microflora.

The existing stormwater treatment facilities of the fleet depot consist of a receiving chamber, a sand trap, distribution trays and four tanks for mechanical sedimentation of water, at the end of which there is a tray for collecting oil products and polyurethane filters.

According to the technology used before the reconstruction, wastewater flows into the receiving chamber, where it is distributed by pipelines to 4 vertical sand traps with manual sand removal and then enters the settling facilities equipped with mechanical scrapers to remove sediment (scrapers are currently not working due to wear and the sediment is removed manually 1-2 times a year), the settled water passes through a polyurethane filter, on which oil products dissolved in water should be sorbed.

After a certain period of time, the frames with polyurethane must be removed from the container, oil products and other sorbed substances are hydromechanically washed out of the frames, and the frames are again placed in the container for filtering water. In practice, there is no effective sorption of oil products on polyurethane. In addition, in the stormwater treatment plant, polyurethane had decomposed in less than a year of operation of the facilities, and stormwater passed through the treatment plant in transit. It made the fleet depot constantly pay fines for exceeding the amount of oil products in the treated effluent.

A new biotechnology was developed for the reconstruction of standard treatment facilities, which is presented in the technological scheme. The existing containers are made for synthetic (polyurethane) filters to serve as accumulators of oil products. However, instead of polyurethane foam plates fixed into metal frames, a fibrous carrier with immobilized nitrogen-fixing associations of oil-oxidizing microorganisms was mounted on the frames and they were placed in the filter container. After such reconstruction, the filter tanks were turned into a submersible biofilter.

At the end of the settling tank, on the water surface, floating devices "D1" of an improved design were placed. They were made a fibrous carrier, on which nitrogen-fixing microorganisms (destructors of oil products) were also immobilized – the microorganisms consisted of floats to which a fibrous carrier was attached. Aquatic plants were planted between the floats of the device on connecting elements, which ensured the purification of water from nitrogen and phosphorus compounds.

The introduction of attached associations of microorganisms-destructors capable of mineralizing aliphatic, aromatic hydrocarbons and their derivatives into polluted stormwater, leads to a significant intensification of water purification and ensures the stability of this biological process. In contrast to existing biological products, which require the use of nitrogen compounds for water purification from oil products, an own approach was proposed, with using selected nitrogen-fixing associations of microorganisms immobilized on a fibrous carrier. Other aquatic organisms – bacteriophages and those transformed into submersible biofilters – quickly return phosphorus and nitrogen compounds to the environment, and microorganisms and aquatic plants again assimilate them, being included in the circulation of substances. This makes it possible to avoid the use of nitrogen and phosphorus additives in the process of cleaning stormwater, as well as to keep the selected association in the required place.

The structures have been operated for less than a year, so the new plants have not been removed yet. 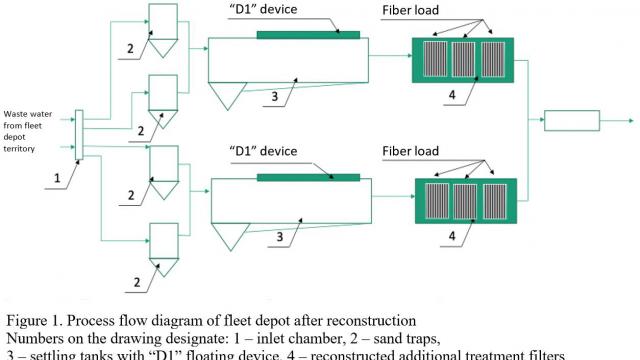