The dispenser unit consists of a cone shaped polyester dosing headpiece, chemical container, dosing pipe and mounting part. Precipitant is dissolved into stream water from dosing headpiece that is partly submerged in water. At the demonstration sites, V-shaped pipe outflow (demonstration site 1) and V-notch weir (demonstration site 2) were used to change the water level and volume of submerged headpiece in relation to water flow in the ditch. As the flow increases, also the contact with precipitant increases, and more ferric sulfate is dispersed into the stream.

Both demonstration sites were established at small sized agricultural ditches at the municipality of Lieto. These ditches are located in Savijoki catchment area, which is one of the biggest sub catchments of river Aurajoki. The demonstration sites were chosen for pilot studies due to high dissolved phosphorus concentrations, verified by water samples taken from potential nutrient hot spots.

It is considered that higher velocity of the flow, in closed pipe structure, caused increased friction to the chemical dispenser, leading to over dosing of the chemical. In demonstration site 2, notable difference in pH did not occur between the sampling points. Changes varied from 0 to 0,3 units (average 0,06).

The method was proven to have high reduction rate for dissolved P, when operational and can be recommended for high dissolved P load hotspots. Dissolved phosphorus reduction percentage on both demonstration sites was considerable.

Because of the hygroscopic properties of ferric sulphate granules, the precipitation chemical clogged several times in dispenser unit dozing pipe and headpiece. Clogging was partly prevented by improving the waterproofness of the chemical container and dozing pipe. Dispenser unit functioning was also limited during winter time due to subzero temperatures and icy conditions. 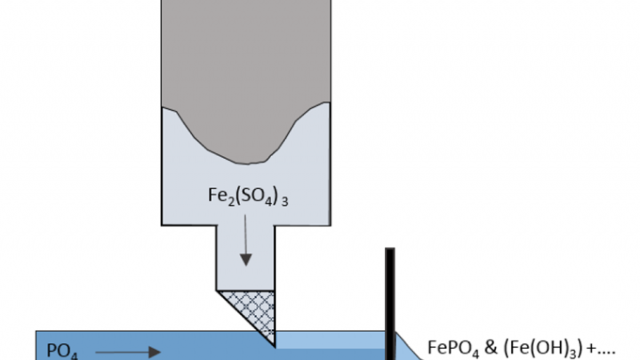