Marine pollution by microplastics (tiny plastic particles less than 5 mm long) has been recognised as an emerging issue. Wastewater treatments plants (WWTPs) have been identified as important sources for the release of plastics into aquatic environments that may lead to further contamination. Although WWTPs treat and remove the arriving solid waste, they are not designed to remove microplastics. In the scope of H2020 CLAIM project, is included the development of methods and technologies to prevent/minimise microplastics’ (visible and invisible) entrance into the sea, by treating them at the source (WWTPs).

One of the developed devices is a low cost, automated and self-cleaning filtering system for microplastic litter to be installed before a photocatalytic nanocoating device (developed in the CLAIM project) in order to supply it with an accumulated liquid litter of appropriate size, which will enhance the efficiency of the photocatalytic device by blocking the bigger particles that would need more time to be dissolved.

HCMR developed and fabricated a lab scale prototype cleaning filtering system that has been tested in laboratory controlled conditions and achieved validation of TRL4 (see Fig.1). Some modifications of the lab scale design were made in order to work under higher pressure and flow. After redesigning the pilot scale prototype by Waste et Water Sarl (WnW), it has been decided for it to be manufactured with stainless steel sheet 304. The filter is cylindrical with height of 380mm and a diameter of 280mm (see Fig.2). The stainless steel pilot scale prototype (Fig. 2) has been tested for its efficiency in the HCMR Oceanography Laboratory in order to investigate the performance of a dual-media sand layer filter for microplastics removal from water. The system includes pumps, sand-filters, electro-valves and other instrumentation and is fully automated. The results show that the pilot scale cleaning device is able to retain microplastics larger than 80 microns.

For use in WWTPs, a pilot-scale cleaning device has been scaled-up for industrial application (see Fig.3). For the design of the up-scaled model, the following parameters were taken into consideration:

The final design consists of two sand filters that work in series. The cleaning automated filtering (pre-filtering) device has hydraulic valves in appropriate places so that it is easy to change the connection of the two sand filters from series connection to parallel connection.

The filters are skid mounted and can easily be moved. In front of the filters is the electrical panel for the automated operation (Fig. 3). Instrumentations as manometers, flowmeters and pressure sensors are used, succeeding efficient filter operation.

The up-scaled system in able to filtrate 1.5-1.8 m3/h and is currently operational for field testing and demonstration in Megara WWTP in Greece.

This technology can easily be used in:

Results and next steps

The technology has the followings components (28,000 € for the automated pilot scale and the automated upscale models):
• submersible pump: for feeding the sand-filters with water
• sand-filters: for microplastic retention
• electrical panel: for energy supply and automated operation
• centrifugal pump: for the sand-filter backwash
• instrumentation: flowmeters, manometers etc

The above cost concerns a device of 1,8 m3/h, suitable for an equivalent population of circa 200 inhabitants (small scale device).

The automated filtering device has been designed and constructed by Waste et Water Sarl (WnW) and the Hellenic Centre for Marine Research (HCMR), Greece in the framework of the CLAIM H2020 project (https://www.claim-h2020project.eu/).

The pilot scale prototype, has been tested already successfully in HCMRs’ Laboratories in Crete and is able to retain microplastics larger than 80 microns. The cleaning automated filtering device was redesigned after the testing and some modifications have been made.

The prototype has been tested, and the efficiency is 95.67% for microplastics using a plankton net of 50μm.

Potential applications in the BSR

This technology can easily be used in WWTPs were the effluent ends up into the sea and into rivers. It may also be used in potable water refineries as numerous studies reported the presence of microplastics in treated tap and bottled water. 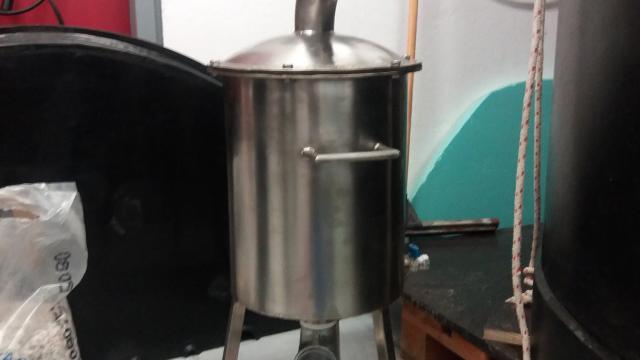